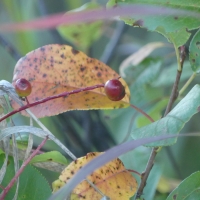 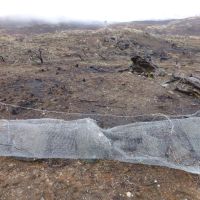 Speaking with the Earth 1: Orkan

For the last few weeks, I have been working towards an explanation of how the Earth can be used to augment human intelligence. The challenge is to articulate a way of doing so that supplants the notions that either Artificial Intelligence will irrevocably replace human intelligence or that the only way to counter AI is to meld human intelligence with machine intelligence. To arrive at an explanation of how humans can work in concert with the Earth instead, and in doing so be made vastly more intelligent than either humans or the Earth as separated concepts, I have found myself working out the difference between intelligence and consciousness, as two separate modes of problem-solving, and exploring the ways in which consciousness (and its problem-solving capabilities) lies outside of what is commonly called the human mind. Before I begin to work out how a human-Earth partnership can work, I find myself once again at a point of stepping aside to build up a vocabulary, because the first thing that is needed is an interface language. It would be wondrous if we all learned the indigenous languages of our parts of the earth (in mine, nysyilxcin and secwepemcsin), and thereby incorporate the landscapes within our bodies, but that is going to take some work yet. Luckily, there is a parallel path, within the language I am writing here and which you are reading. We know this language as it has evolved to fulfill a technological role in the world, yet as a consequence of this learning have learned large parts of its indigenous nature as well. I propose we build up an interface language with that, as a first step. It should prove sufficient for our work. Over the next few weeks, I will be exploring this language, and then let’s see if we can put it to use. So, without further introduction, let us begin with Old Norse, or Icelandic, for the doorway it holds into the ancestral language of all Indo-European peoples, and one of the primary energies of the world: Orkan.

Orkan is familiar to us all. We know it by its contemporary translation: energy. I say “contemporary translation,” because energy (the contemporary concept) represents a “field” of “statistical probability,” a random spray or spatter of loose electrons and charged particles, generated from the effects of magnetism, gravity and space-time, which can be harnessed through technology, and bought and sold. No argument there. It gets cold in the winter. A few dancing electrons are welcome in this house. But I mean something different, a more elemental force, as our ancestors understood it, and which has guided the development of that abstract, mathematical, and scientifically-understood term, so, please, set “energy” aside for a moment, and contemplate orkan. Here’s some: 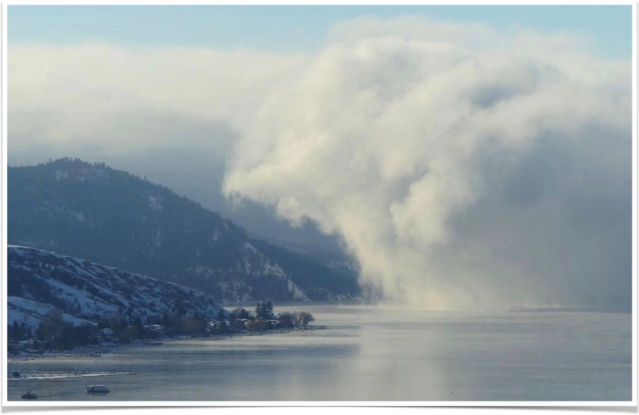 Yes, a common word for this elemental force, as manifested in the above image, is “storm” — a snow storm, specifically — and that’s just how our ancestors understood it, because “storm” and “orkan” were originally an undivided force. They are the same word, and work in the same way that “energy” is said to work. As Wikipedia puts it, “Work transfers energy from one place to another or one form to another.” Beautifully said. There are equations for this force (They are below, in blue. Do, please, skip them if you like. They are here for your interest, should you find them helpful. Otherwise, the discussion carries on without them just fine):

For example, if a force of 10 newtons (F = 10 N) acts along a point that travels 2 meters (s = 2 m), then it does the work W = (10 N)(2 m) = 20 N m = 20 J. This is approximately the work done lifting a 1 kg weight from ground level to over a person’s head against the force of gravity. Notice that the work is doubled either by lifting twice the weight the same distance or by lifting the same weight twice the distance.

From Newton’s second law, it can be shown that work on a free (no fields), rigid (no internal degrees of freedom) body, is equal to the change in kinetic energy KE of the velocity and rotation of that body,

The work of forces generated by a potential function is known as potential energy and the forces are said to be conservative. Therefore, work on an object that is merely displaced in a conservative force field, without change in velocity or rotation, is equal to minus the change of potential energy PE of the object,

The point is, work is orkan. It is also a whirlpool (and anything that whirls) a hurricane (that whirling again), an organ, a world and even an Urwelt (a German word; environment) or an Earth, a pre-human, undivided space. Orkan is not a human word, and it need not be violent. Here is some of it pooling around a crack in the lake ice today.

Look at it whirl and pool. 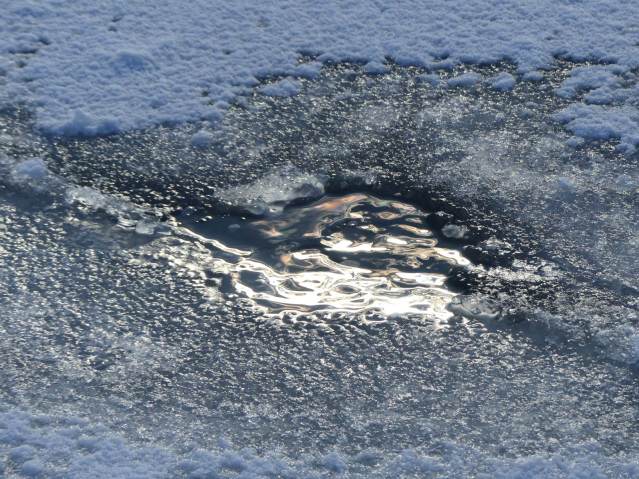 Let’s not get caught up in energy or mathematics here. This, too, is orkan:

The top of the water column, where sky becomes rivers.

Eagle Nest in a Dead Poplar

Other terms that have been divided from orkan and which lead us back to its unity are “works” (as in a factory or industrial site), “word” (which is “Work transfer[ing] energy from one place to another or one form to another”) and Indian Hemp…

… which was worked by syilx women for thousands of years to create ropes, which were the main trade article of the syilx and a mainstay of the massive Fraser River fishery at Chapman’s Bar and Yale and Fountain for some six or eight thousand years. The act of splitting these stems into four, stripping them of their husks, and braiding the remaining fibres into rope became the way in which the syilx defined their work with the world. That too is orkan, although it is a long way from either Sir Isaac Newton or from the Nordic conception of “world” as a spherical space that allows for human life in an otherwise hostile universe. There is something simultaneously cultural and pre-human about orkan. Knowing it intimately allows connections far beyond the energy-technologies of contemporary understandings, however great those are. If we are going to speak with the world, or with the Earth, well, we need this word. Otherwise, we are speaking with something separate from ourselves, and are lost.

Tomorrow, I will add a form of energy to our hoard, one which extends orkan into artifice and back, and which demonstrate a primary principle of the conservation of energy: Ore. Talk to you then. Until then, well, love the ice you’re with, eh. 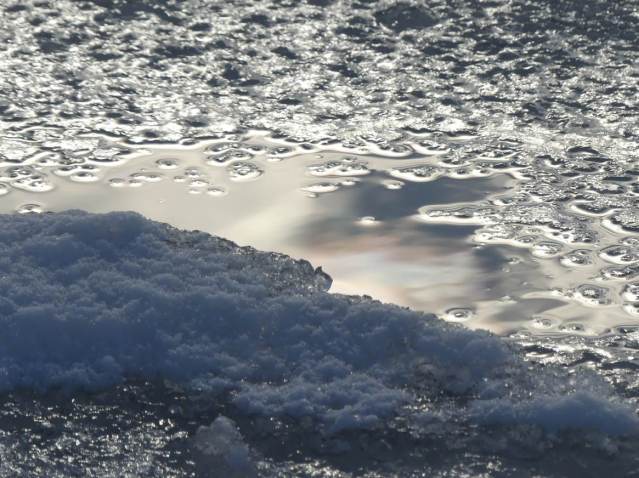