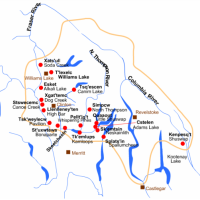 Save the Earth, Save Yourself (Seeing in the Dark, Part 3)

I promised to write about the environmental and scientific consequences of reading the land as darkness, in an embodied science, rather than as light (the kind of science we have today). I meant no criticism of science or of the strength of its method, only a method for working with (and even viewing) what it cannot apprehend because of its initial assumptions. Here’s one.

You: Harold, you’ve been taking blurry photos in the fog again, haven’t you? What is it with you and the fog?

You: Oh, you poor crazy thing. OK, I’ll play along. What is that?

You: So, a bluff above Kalamalka Lake, in Vernon, British Columbia. In the fog. Harold. It’s rock. In the fog.

Well, it’s a story, see. A rocky mountain sheep, with two lambs and a trickster rabbit.  It changes every time you look at it. That’s the story. By looking at it, you are reading yourself.

Well, here you are…

You: Another rock? Harold, this is not science. This is weird poetic geology.

Awww, look at you, lying there, staring up at the sky in front of the herd of sheep. Talk about story! Look at that fir tree growing out of your navel!

The story’s quite complex, really. Especially when trees get involved. Trees are time. The rocks are timeless. There’s enough there with which to read most human social and physical needs, aspirations and struggles. Look at that, um, rather feminine cleft on the ridge line.

You: Freud would have a heyday with you, boy.

Freud didn’t know how to read the land like this, but he was going in the right direction, because if the land, viewed by a human, is a map of the human’s self, then reading the clues of the human self should give you a a rough approximation of the land. The only difference between Freud’s method and this more traditional one is that Freud’s was scientific, in the terms of the science of light, in that it predicated itself on the point of view of the individual, and then sought to define the world according to the images cast up by that mask.

You: What on earth is the difference?

Perspective and point of view, for one. These images are actually written in the physical world, not just in body images developed in the mirroring of psycho-sexual forces in childhood. They require the surrender of the self and an acceptance of identity in place. Freud’s require an acknowledgement of the primacy of human biology. I think we’ve grown beyond that. It is so, like, 1890s.

Here you are now. (Below.) Or, at least, you your own ancestor, with your cougar friend (middle foreground).

In stories like this, motion is represented by distance and fog — by layers of light, so to speak.

Forget logic. This is how your body apprehends the world. Either you accept that or you abandon it and try, like Freud (and his science), to sublimate your experience of the world and of your self-in-the-world.

You: Harold, we call that childhood.

You: You’re supposed to grow out of that.

Yes, according to narratives of light. In narratives of the body, though, time, or narrative drive, is also represented by trees, especially in their multi-generational growth and succession.

By birds, too, like this raven checking me out.

Either you are a part of the world or you aren’t. You can’t play it both ways. The consequences are actually real. For example, people who thought this lump of rock was only a geological formation, a volcanic burp, so to speak, the core of an ancient volcanic plug lifted up into the sky by subduction, cut a highway through it, which entailed a lot of blasting and the obliteration of the formation’s connection to the lake below, and much of its story. Now, the story contains holes, just as the geological science did when apprehending this behemoth, and contains as well the record of that invasion and disruption. That is part of the story now, too. It is, however, what it is. It can’t be covered over.

You: Well, not unless one rejects your thesis.

You: Colonialism is the highway? Come on, it’s just there to move Mexican lettuces into the British Columbia Interior.

You: What is wrong with that kind of colonialism then? It sounds to me like progress.

Yes, it’s that, but it can’t tell this story.

Actually, it’s the twin of the rock bluff we saw earlier. As you walk (or drive) through the Commonage south of Vernon, it shifts position in relationship to you. By moving, you provide the narrative to this story. Characters change position. They interact in different ways. The hill becomes grass, then becomes stone, and then you enter its story.

Ancestors in the Rock (in the mind)

It doesn’t map stories. It maps a system of logic and the distancing from story.

You: The growth of childhood into mature adult identity. Yes.

Or the avoidance of responsibility and adult identity. Here, look at it again.

And again. The red circle below is the stone bluff in this narrative. The yellow circle is the grass hill.

You: What is that industrial site hiding behind the bluff there?

Ah, that’s the landfill. Anything that people don’t want in town goes there, is processed into compost, is burned, or is buried in gravel. Right behind a sacred, ancestral hill. Right behind your mind, actually, and you, lying there with your sheep friends. Today, if you climb the grassy hill, in addition to a view of the extended narrative of the bluff, and what it can tell you about yourself and your relationship to the land, you also get a view of the dump, and garbage, and the kind of activity that mapping does to the land. Things are what they are. You can, however, sublimate it all and hire a psychologist to try to put the pieces all together.

Freud: I am in the business of building selves, not doing jigsaw puzzles.

Freud: So, tell me about your mother.

She was in the business of building a family. That was her identity.

This isn’t all poetic thinking here. In the image below, for example, these principles can be seen working out ecologically. Have a look.

This is a grassland hill in the Commonage just a bit to the south and west of the grassy hill— a little higher, and on the north-facing slope. What you’re seeing here, geologically, is post-glacial or peri-glacial deposits of gravel, eroded by water into gullies, likely immediately after the glaciers melted. Those gullies capture snow drifts, which retain water as the winter melts away, extending the reach of water into the coming dry season, and providing not only habitat and water concentration (which allows for richness of riparian life, a vital part of the grassland ecosystem) but a system of heat-cold water pumping through the landscape and into the wetlands in the hollows along the highway below, where people like to throw their unwanted refrigerators and kitchen stoves and one man keeps bees. Here’s another view. 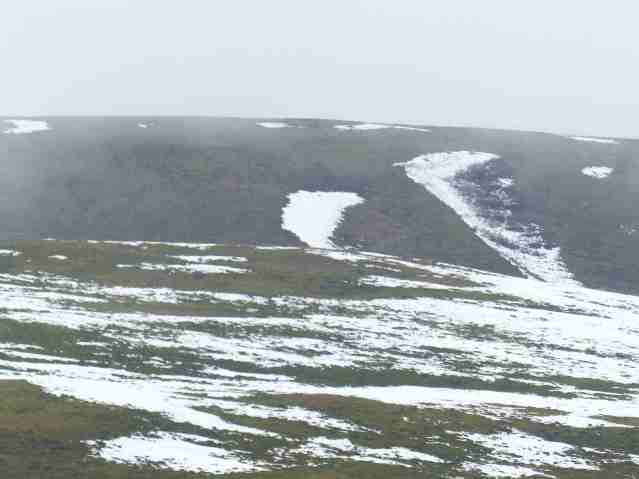 This, too, is a story, and an ancestral face no different than the figures in the bluff above, or the lake below the bluff. These ones, however, aren’t in human or animal shape. 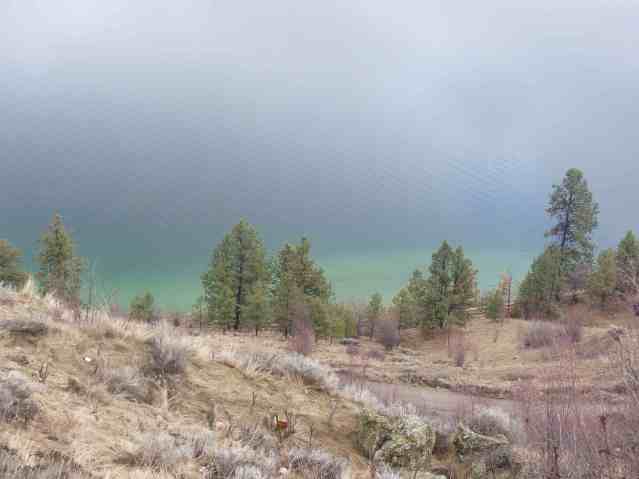 They are the shapes that humans and animals move through.

Nonetheless, map intelligence, based on the human-self-centric methodology of light-based science, focussed as it is on the empirical and using the self to remove body-based knowledge from the pool of empirical data (this is called ‘growing up’ and “mature understanding” in science-based or individual-based culture), puts roads into this ecological body (in the sense that a biome is a life form) and destroys, or at least vastly alters, its ability to function. The road becomes a part of the biome, and its intrusions alter the flows of energy in the land. Compare this … 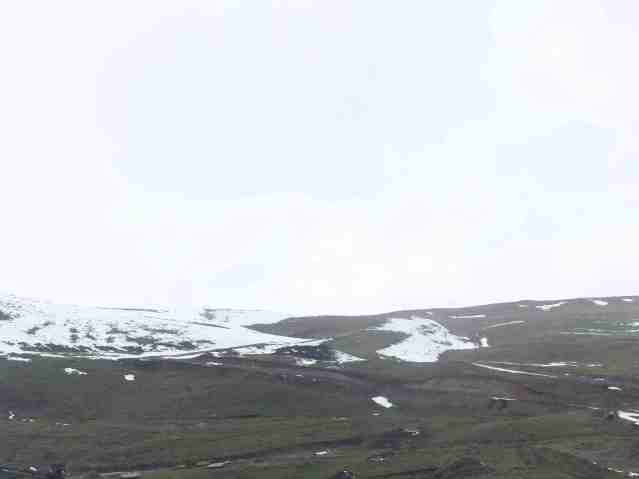 … to an un-roaded section just to the left of the above image.

In the road image, the riparian area (the shrubs in the left bottom corner of the image), and its ability to harvest water and support life, has been transformed into a road, and its ability to harvest water and support social threads. Each is an image of the intellect that approaches it and its attitudes towards self and the body. One leads to a living earth. One leads to a dead one. In the dead one, this landscape is known as “brown” and “a desert”, yet look at it up close, yesterday. (Below) Here’s a riparian area storing water. Note that the highway below has already shed its water, hastening drought rather than building capacity.

Similarly, here is the lower face of the dynamited bluff, above the lower highway that separates it from Kalamalka Lake and the old Syilx villages below. Notice the lichen, slowly rebuilding the land’s capacity, which has been set back, in evolutionary terms, 10,000 years. That’s 10,000 years of complexity in your mind. 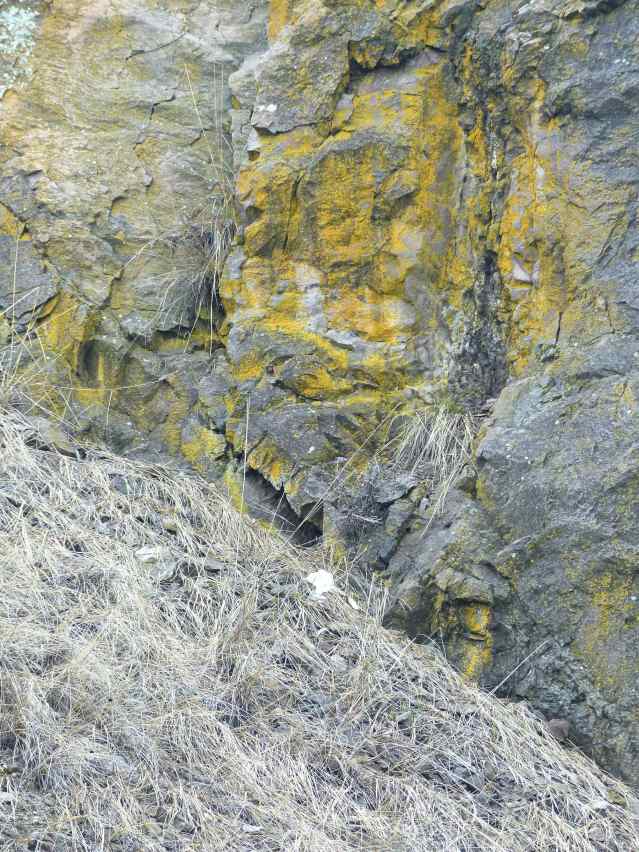 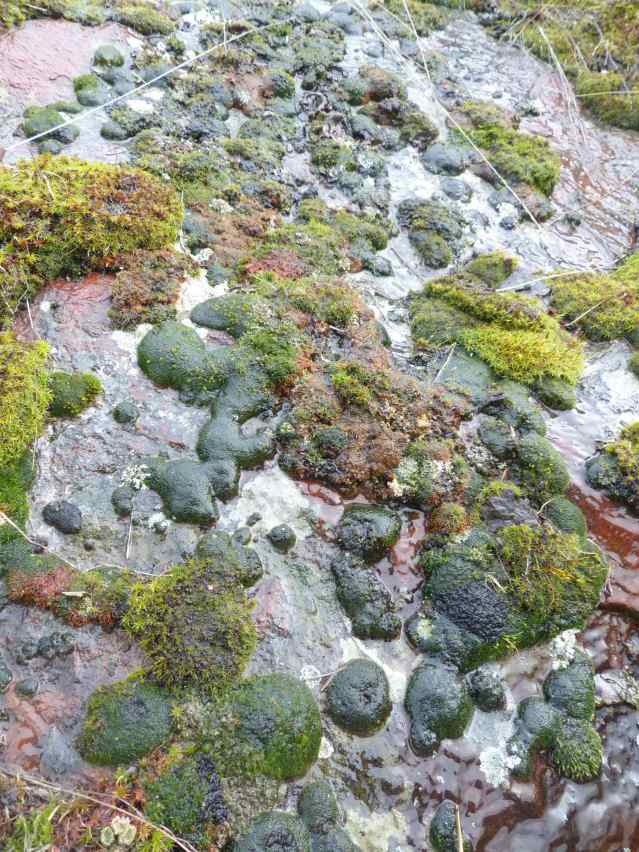 Yeah, not a desert at all. This is a better model for your mind. What’s more, it’s mine at the same time, and the earth’s. And hers…

The alternative is Mars.

4 billion years in the past.  That’s four billion years of your knowledge and identity obliterated. That is personal and ethical erosion. It is the ultimate self-negation.