How the World Reacts to a Human Lack of Peripheral Vision

So, since it’s kind of hard to get a handle on how a human thinks when one is a human thinking, which is like asking a vacuum cleaner how it sucks while it’s in the middle of sucking, it’s always a pleasure to be given a window into the thinking of great apes, so if you’re game, here goes. Ladies and Gentlemen, your good friend Siya?

She’s making these berries for us, and bringing them down into our reach. There’s variation in the species: tall ones for the robins; short ones for apes and deer; and the bear gets whichever ones she wants. We could, in other words, speak of bird siya?, bear siya?, robin siya? and ape siya?, and harvest with respect (and some difficulty) on the alternate variations. Funny thing, though. Siya? is full of seeds, so not that popular among your regular ape crowd today; blueberries for them, in cell packs made of magically-mangled crude oil. Still, many humans keep an eye on siya? and some even make wine from her fruit, or pies that taste of marzipan, or traditional foods like pemmican, cheesecake (if it’s not a traditional food, it should be) and jam. And even though she is as much of who we are in this place as apes are themselves, and probably a lot more, they call her wild, and pay her no mind. On the other hand, a tree that is just as productive, the Chinese Elm, that apes introduced to these parts, and used to keep for its prettiness and its shade, because the sun, whew. You can’t even talk in full. Sentences. Eh. 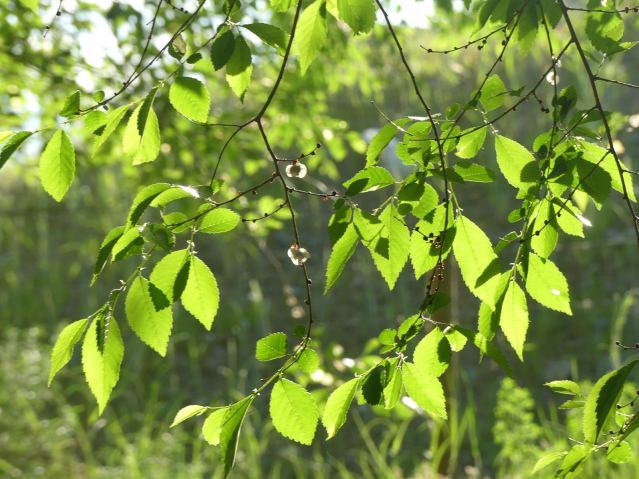 But now that it didn’t stay where it was put, because it has, let’s face it, a zillion seeds per trees, but did just what the apes have done, putting down roots everywhere and crowding out siya?, humans call it a weed and root it out when they can, even though all poor elm is doing is filling the spaces that humans have laid open, which sounds like good work, really. Birds love these trees as much as siya?, and many species love them more, including the flickers that bring the hummingbirds in the spring by leaving insects trapped in sap over the winter, and the magpies that call out and keep everyone on the hill out of harm’s way when a human stumps around like an improvised explosive device, and the gold finches that snap up the pests in the orchard next door like nobody’s business.

If an ape can’t eat it, and it doesn’t stay where it’s put, out with it! The elm is prepared: seeds seeds seeds seeds. One will make it! Siya? is sneakier. After all, she grew up with apes here, over the last 20,000 years, and is onto their lack of perspective and peripheral vision. She grows sneakily here and there, offers a few berries, and gets their fumbling fingers and tipped baskets to scatter her to likely places: a nice wet little niche, where it’s cool on a hot day, or a nice slope with good run-off and lots of light, where any berry-munching apekin worth its salt can look out and enjoy the view. And the humans? Well, they’re getting ready to go fishing.

Poor hungry things. It’s a good thing siya? called out to them a month ago to let them know where to come later.

She knows their stomachs will remember. She’s very kind like that. She knows how to flow.