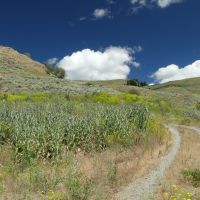 This is one of a series of posts about how to maintain a local landscape in the face of technological pressure. In this case, both the primary observation (all land and landscape is a system of ethics) and the intervention (be human) are simple. That’s not as obvious as it might sound. Let me try to explain. As an example, the grassland fly below is sitting on a cedar fence post from the 1960s, that is about to be pushed down to make room for a (guess) $1,500,000 house, affordable only to someone who did not make their money in this place, because this place no longer has the capacity to build its own houses in its most desirable spots for its own people — surely a measure of societal sustainability and success. (Selling the most desirable land to people from other cultures is not a recipe for cultural survival. It is a recipe for cultural replacement, with the notion of replacement becoming the culture.)

Something else you might notice: this fencepost is made from an old growth cedar tree from the British Columbia Coast, one of the 1,000 year old trees of pre-European civilization. It was stolen and transported here. What’s done is done, of course, and theft is not the issue. The issue is that this fly is standing on this history, in a world controlled by technology, yet is unable to control it. That right has been given to one particular class of inhabitants: homo sapiens. Within that group of critters, only one particular class has the means to control the technology, and that is a class of system managers from outside of this region, and those who serve them. That’s class behaviour, and that’s my point. It’s a method of human display and power-positioning to which the earth has now been enslaved. It makes all of us slavers. Those are harsh words, perhaps, but this is important. Please let me keep trying to explain. The image below shows a surviving bit of grassland, very close to where the green fly above was foraging. This is a mariposa lily with its pod open, waiting for a deer to brush it and knock its seeds into the bacterial crust on the soil. The timing of deer migrations and water patterns is probably exquisitely timed. 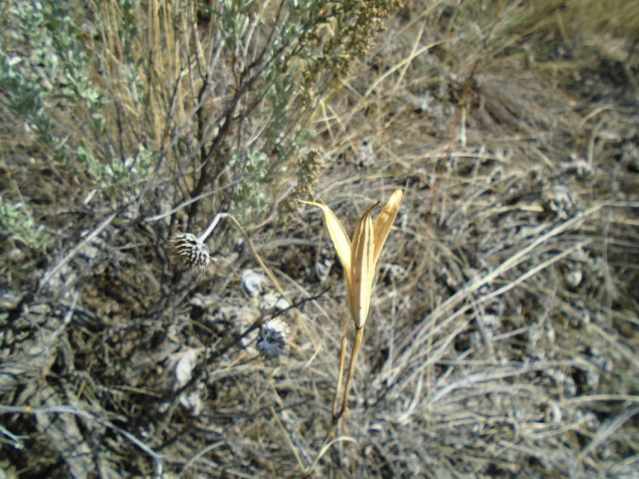 The only thing is, this is all taking place on a piece of land adjacent to the doomed fencepost, and likely the next plot of land for the next house. It is, in other words, also a class space. It is soon going to vanish. Eventually, so will the fly. So, putting all that together, we get something like this: in this piece of earth, a certain class of a certain class of inhabitants have the rights to self-determination, and others don’t. They are destined to extinction, in the manner that indigenous peoples were considered destined for extinction during the colonial period, due to their susceptibility to disease. (Of course, the disease was more the result of slavery and starvation than outright susceptibility, but that’s the secret few mention.) In this socially-charged landscape, the rightful inhabitants who don’t have land-ownership rights within human society are called “wild” or “nature” or “lazy” or “poor”, in the case of homo sapiens. Class behaviour for sure. The only thing is, every last one of us is equal in this place, and all of us are growing in the sun, and whatever this place is we are all part of how it is unfolding. Any deviation from that is a chose deviation, with class repercussions, not just for homo sapiens but for everything else that is here. Currently, this situation is being managed through technology, ownership and notions of capital (all pretty much the same thing), which draw down the energy of the land so it can be transferred into social energy, for class-based profit. That’s pretty efficient. It gives us houses (well, castles) like the one dominating a coyote, porcupine, bear and deer trail below. 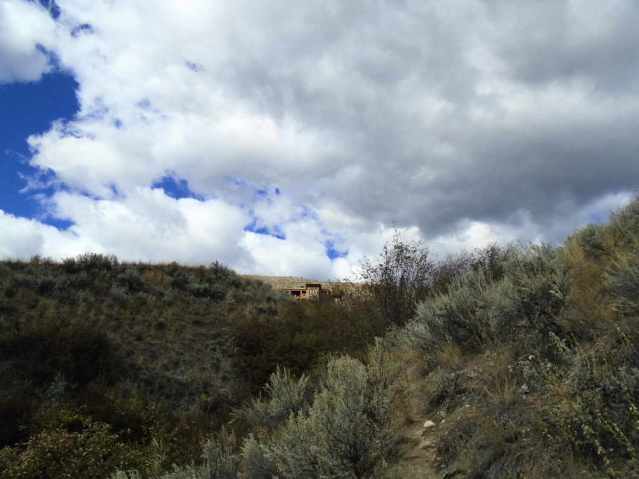 And that bring us to another point: that house rises from the same set of social webs and the same set of class behaviours as the fencepost, the fly and the workers who built the house. It dominates the landscape exactly in the manner of its wealthy owners. It, too, is class behaviour. What’s more, as it stands in for a human, and is an expression of human bodily consciousness and social positioning, it is a special kind of human: a corporate human, much like the corporations which have the rights of biological humans to create the wealth that allows such houses to be built. And that’s my point: we can’t make accurate maps of social and material interfaces on this land without defining class and humanity. Including that house in the group of humans (calling it a specific class of human) makes discussions of land use more meaningful, in exactly the same way that including the drawn-down energy of the earth into financial calculations makes real costs and benefits more visible and more capable of being grasped and discussed. Check out this group of cows and their kids, put on the grass to eat autumn’s invasive weeds (nothing else is worth eating anymore, in this formerly wealthy landscape). Who needs a fence, eh.

Truth is, the fence is as much to assert control of other humans as it is to assert control over cows. It is an extension of human will. Those who live by it are bound to that human will. In other words, just like the house above let’s accord the cows, the invasive weeds, the surviving sagebrush and the fence human class rights as well. Does that sound strange? I hope it does. I hope it demonstrates how the word ‘human’ has been mis-used, along class lines, blurring equality between creatures, earth, societies, relationships and even virtual states. They are all humans. (Preposterous? Feel free to insert another word in place of ‘human’ and discard ‘human’ as an operative term.) After all, humans aren’t biological creatures. We are human because out of biological origins we have built up a parallel, virtual system of identity, based on the foundation of an interest in mark-making, such as the trail a five year old child made the other day, on the trail put over the old irrigation ditch made by Earl Grey back when this place was British. Elsewhere, he’s known for tea. Here, he’s a place to create identity — whatever identity you want. 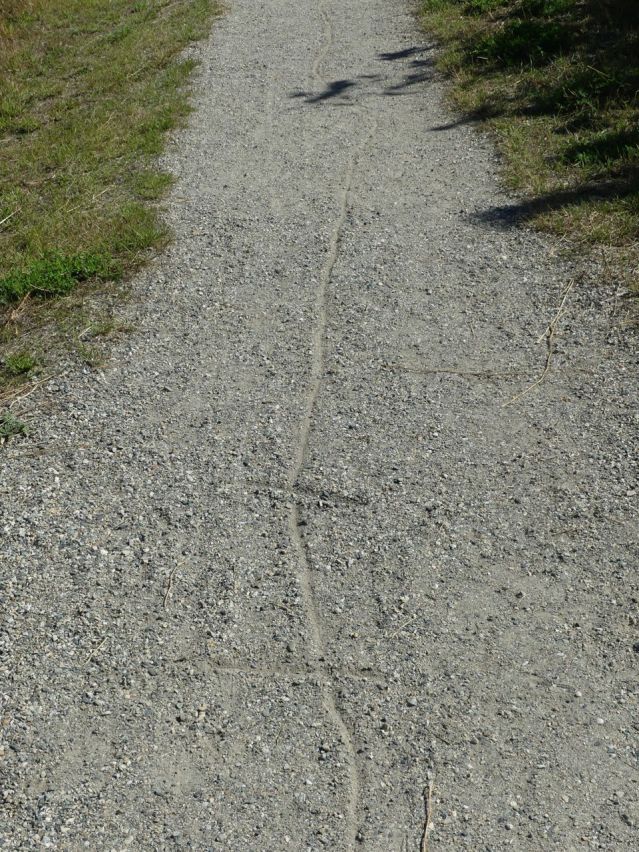 The trail goes under these cottonwoods…

… planted to create a barrier between the poisonous chemicals sprayed on the orchard below and walkers on the trail. In other words, like cattle, or people separated from land by fences of private ownership (i.e. by capital), this tree has been assigned a class and slave relationship within its virtual living space, contemporary society. It too is human. It’s one thing to define our age as the anthropocene, the age in which humans have the power to control or destroy everything on earth, and it’s one thing to extend rights of power to all human groups, by race, gender, social class, country of origin and so one, but it’s a totally incomplete effort without extending that dignity and those rights to all that we assert control over and all the means by which we do it. If the world is controlled by homo sapiens, the world lives within the human social grid. It has been enslaved. If there are parts which lie outside that grid, let’s give them the respect of real difference, which means to break down the fences in our heads that tell us we have the power to control them. If there are parts which lie within the grid, let’s give them the respect of social inclusion, and talk about the pattern of social hierarchies that control not only them but all of us as well. Otherwise, the lives we really live, and the grids of power we live it within, remain invisible and every choice we make will founder, because it is based on a big lie. Is a society likely to take on this program? Of course not. Power is power, after all. However, a primary change is possible: to stop living from the proceeds of slavery. This we can change. It will create different patterns of individual and social identity, which will create more sustainable landscapes. Will it take 50 years? That’s nothing. I remember when those fence posts first came to the valley. That’s not so long. Will it take 100 years? That’s nothing. The mariposa lily I showed you has survived 100 years of overgrazing and fire suppression, and is still capable of springing back to abundance if given a chance. Does it matter? Yes. We will guarantee abundance for our children’s children’s children if we give them a place in the land. Sometimes things are exactly what they are. It’s not exactly that the nodding onion below (a vital and exquisite indigenous food plant) is “human”.

It’s that “human” and “nodding onion” are the same thing. The word “human” is a fence. We need to bust it down.