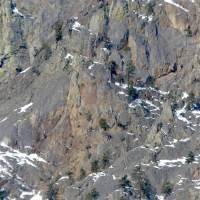 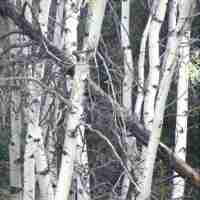 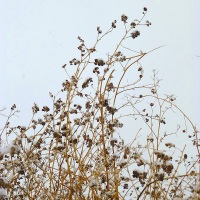 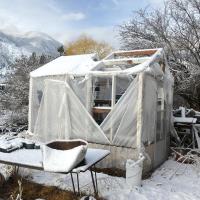 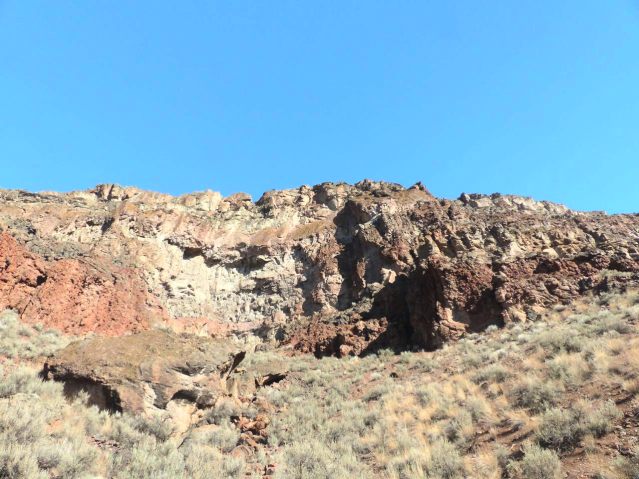 Wrong. It’s made by water. 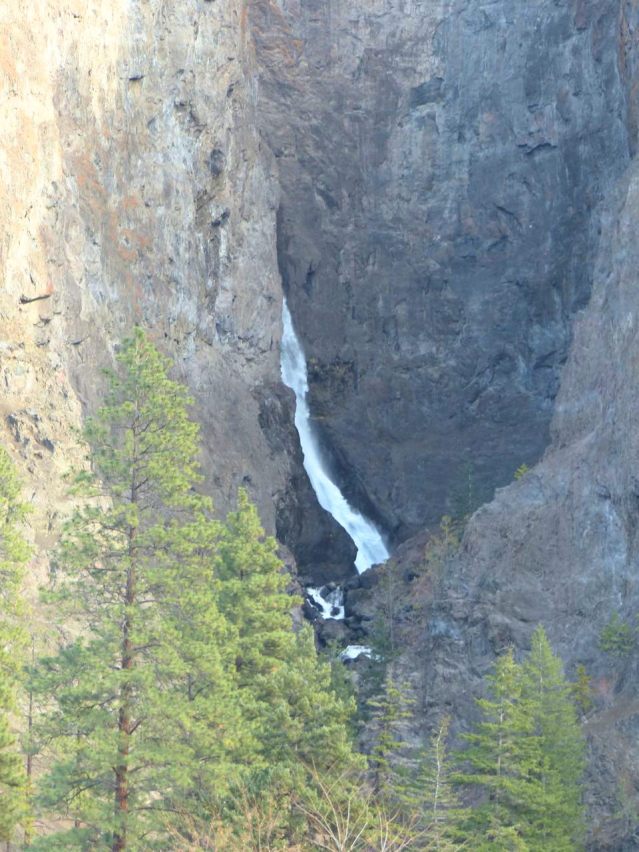 Below is the old periglacial lake bottom of Glacial Lake Kamloops. That flat land is the bottom of the lake. The train from Canada is running along the Thompson River, which is a tiny remnant of the post glacial river that took the lake bottom mostly away. Notice that there are multiple levels of lake bottom. There were many lakes, over many centuries. They were all created by ice dams.

This matters now, actually. This same process is happening today with rain and snowmelt. Look at the image below, taken forty kilometres downriver. That’s volcanic ash. It holds water and releases it in complex ways, some fast, some slow. After some 55 million years, nothing much is growing on it, as it is so active (just like a volcano). Nonetheless, it supports the pines and saskatoons below it, by shedding water in complex ways. 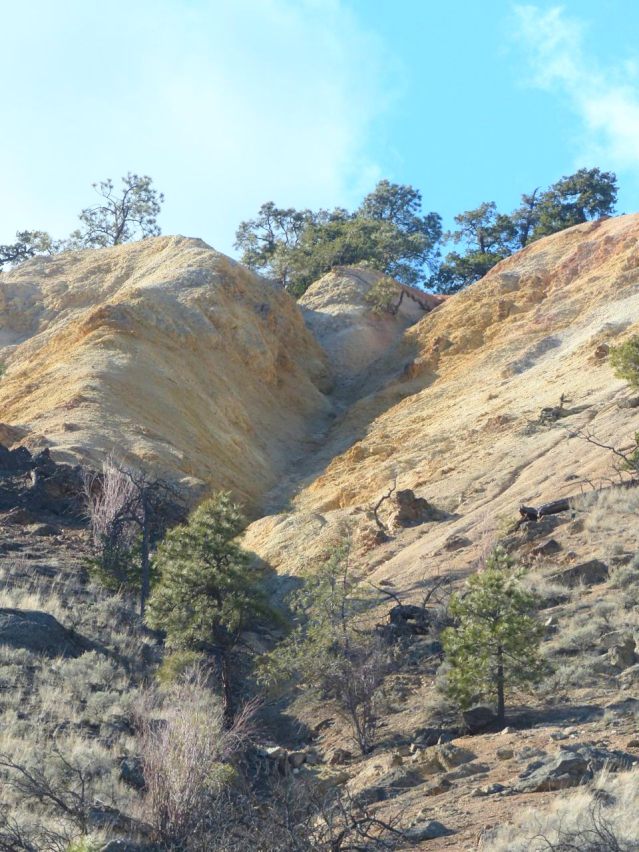 In part, it sheds snow slowly, in shadow, and quickly, outside of shadow, maintaining a flow for a long season, which then turns into the season of rain, which follows flows set by the spring melt, modulated by the water-retaining capacity of the soil. In a dry landscape, this dry, barren hill is not dry. It’s wet. What is like that? A glacier! Here’s another glacier. 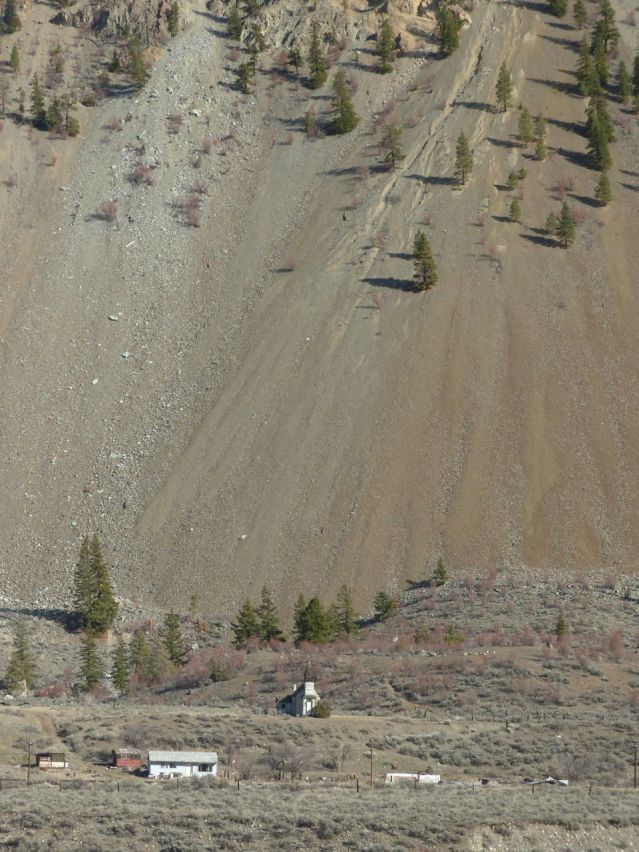 Yes, this one is a glacier of rock, but don’t be fooled. For one, there are the channels of snow melt in the scree (a particular kind of post-glacial flood… very post-glacial.) For another, it moves water to those pines and saskatoons. For another, this is an ancient Syilx fishing and village site on the Thompson River. For another, it is a gravity glacier. So is the mountain in the image below, just upriver. Look how the scree flows down, broken apart by the freezing and thawing of winter water and ice.

Those cycles aren’t just bound to the seasons. They are bound to the movement of the earth around the sun. The seasons are extensions of that movement. Look at the slope below, in the old (now dry) river bottom that drained out of Glacial Lake Thompson before it broke through and cut down through its lakebed. Note the water-eroded slopes, that are modulated by shadow. Shadow keeps things cool. It prevents water loss. It creates miniature seasons. Glaciers of darkness. 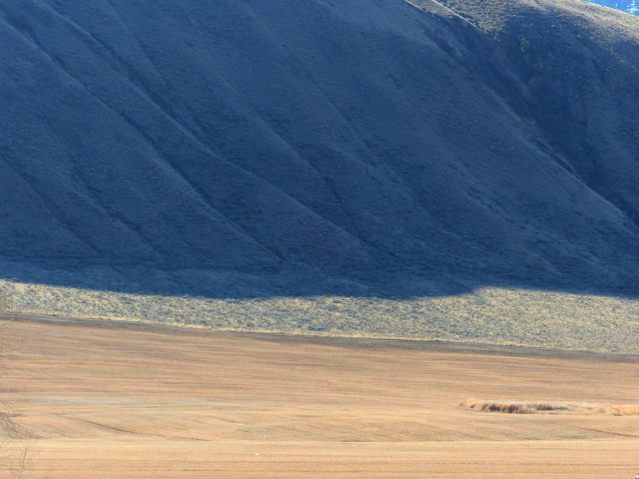 So, that’s the thing. This is still the age of the glaciers. They are still doing their work, and the forces that made them are still at play, delivering cold, which breaks down mountains through the combination of water and stone, in changing regimes of warmth and cold. Why does this matter? Ah, because this is considered an arid, dry climate, without water or the capacity to capture water. Since the 19th century, water has been captured in high country forests and piped downhill, or piped out of ancient, post-glacial reservoirs deep underground. It is, in other words, mined. What if it were harvested? What if the work of the glaciers could be accentuated? It is in India. That’s where people living off of glacial meltwater are able to keep their agricultural, high mountain lifestyles, with artificial glaciers created by a 79-year old retired civil engineer called Chewang Norphel.

The trick is to use the cold of the mountains to store cold through the growing season, so it can be released slowly, rather than quickly, and create life. Here’s the plan:

The goal is to capture water, which then captures winter cold and stores it as ice, which then melts slowly through the summer. It is a means of manipulating time, using cold. Here’s what it looks like: 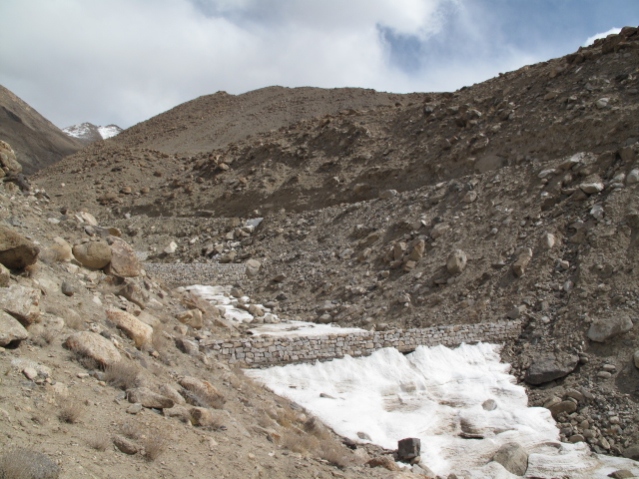 Shadow, that’s the trick. In reality, the barley fields of  Himalayan villages are being watered by shadows. Why does that matter? Why, look at the image below from the Okanagan, on the hillside high above my house. It’s a seasonal stream, created by snow melt, coming off of  sagebrush slopes, and being concentrated and pressurized by gravity. The bunchgrasses and sages of the slopes do their work at slowing the flow into the stream (which is rarely free-flowing), which slows it further with sedges and reeds. 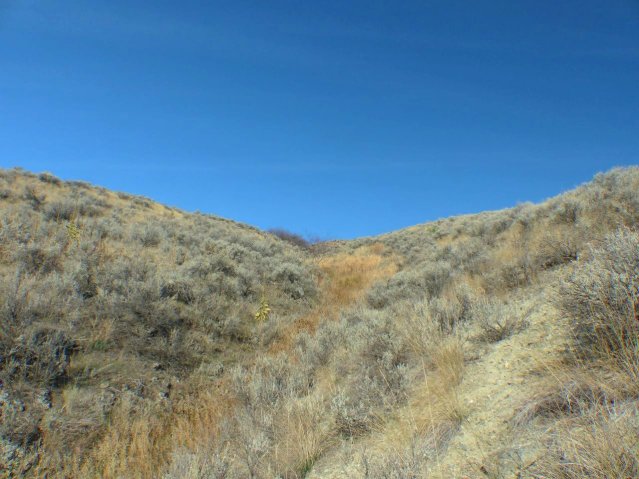 Just like the image of volcanic ash I showed you above, this is a gully (one of 10’s of thousands) which slows melt by collecting snowdrifts in winter, shading them in the heat of the afternoon (to the left), while warming them to the right. Here, however, it is life, instead of clay-like ash, which maintains a water reservoir in the soil. All that is missing to complete the pattern is a lengthening of the period of cold, and further prevention of spring run-off, by the creation of artificial glaciers. Ice, that’s the thing. Here’s the deal: in this valley, farmland is so expensive that farming is a prohibitive activity, and Okanagan food is a luxury commodity only for the rich, who live off of money imported from elsewhere, yet there are millions of acres of unfarmed land, like the stuff above. One of the reasons it goes unused is the lack of water. Hmmm. Does this look like a lack of water to you?

I hope not. I hope it looks like cheatgrass, which has been thriving on non-evaporated water from early October, and is really coming into its own now in March. Well, the deal is, if we’ve replaced our native crops with cheatgrass, which is useless, we can replace cheatgrass with quick crops like barley or millet, and have them harvested before there’s a minute of drought. I mean, it’s good enough for the Himalayas. Isn’t that good enough? And barley is great stuff. Sure, it won’t fit with super-mechanized farming, but, here’s the thing: when a person is hungry and is given the choice between eating something and not, that person will figure out a way to make it work. Does it mean a reduction in the standard of living, to enable small-scale, non-industrial agriculture? Sure. But isn’t it a reduction in the standard of living for 100,000 people in British Columbia to eat from gifts of food every day? Isn’t it an increase in their standard of living to give them a sack of barley seed, an artificial glacier, and the work of their own hands? Wouldn’t that be an act of dignity? There is water enough.

The mistake has been to think that it flows. No. That is erosion.