Don’t Think So Much. Stay Awhile Instead! 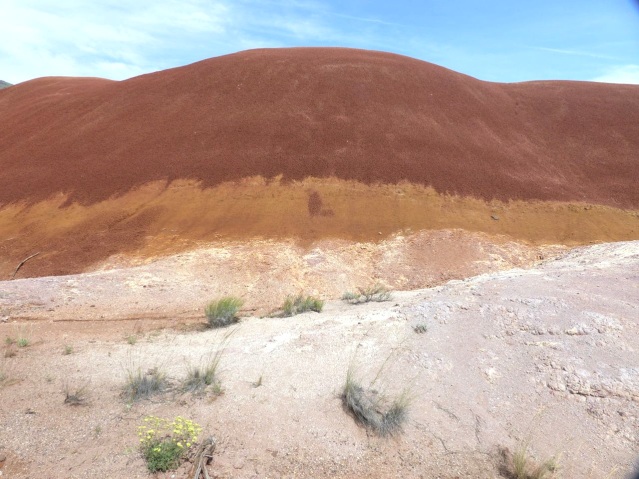 As the grey-haired guy might say, “That’s not a hill.” He’s right. It’s a human point of view that sees it as a hill. He might say (if he was feeling long-winded),”By gosh, it’s an old seabed melted by old seawater 100 kilometres underground as the pressure of the weight of the continent thrusting above it lowers the temperature of the evaporation of water but not its energy exchange characteristics; under pressure the seabed vents to the surface in such fine particles that it resists all water absorption and can’t support life and proves remarkably impervious to erosion. In other words, this is what clams look like 100 million years (or so) after they were clams.” We might. It would be pretty cool (and awfully long-winded, which would kind of offend our poet friend, that young guy with the kick in his step.) We might say, “This is the red blood of the earth.” We would be right. If we were the earth, though, we wouldn’t say a thing. We would be our energy and presence, without a narrative. The narrative is a human point of view. Outside the narrative is energy. You’ll never get there (the trying is instructive, though, plus fun), but you can get close. You can get to this, which is the way that energy registers in the human… (heart, mind, spirit, soul, it’s not overly important what you call it.) To get there, don’t look, exactly. Feel this:

Be it. And then don’t drive away back to your ‘life” unchanged. This is your life. And if you don’t know where to go then, good. You’re ready to sit down and talk to strangers.