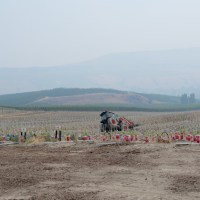 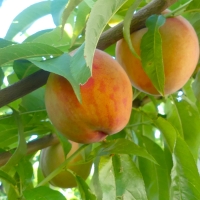 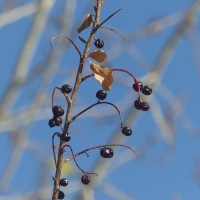 Note the mule deer trail in the left of this image, at an angle up this gravel pit. That’s a pretty normal angle for a mule deer to go up a slope.

The image also suggests a more unusual track, going vertically over the small rise in the centre of the image. Here’s a closer look:

Here the angled track to the left is clearly seen, but the vertical track has become less a trail than an opportunistic scramble, following only a general line. The deer are keeping to the left of this little rise, going up at an angle leading to the right, and coming down almost straight toward us, from a point halfway to the right of the image from the poplar at the crest of the cut. In fact, they’re going in a lot of different directions on the left, but not to the right. However, you might just be able to make out a trail a couple metres before the top of the cut, moving off to the right. It looks like a little bit of level land, but it is a fairly packed deer trail. Here’s a closer look of the scrambled path to the top, above the little rise. By the looks of it, they have been coming down to use the little crest as a lookout, and climbing up to it from the main trail as well.

The main trail is obviously the angled one to the left, yet as we’ve seen the vertical one is not underused, either. Trails like this are important for many reasons, not the least of which is they show the best way up the slope and cut a good path into it. Other functions of such a trail are to disperse seeds, and if the trail isn’t a gravel pit, to till the ground and shift the trail from side to side depending on the age of the grass growing along it. The grass, dropped or knocked off by the deer or carried by water following the trail, provides nourishment for the deer, who in turn fertilize it. The trail also provides a solid path for predators to follow, who are hunting the deer, whether they are coyotes or humans. These patterns are linked. Now, compare the new trail above with the very old one below:

Here we can see a doe trail, used by does and their fawns, for generation upon generation, and also as a nice place for snakes to sun themselves and a great highway for coyotes. Note the scramble of deer tracks up from the bottom of the ravine, to meet the trail, and the lighter, newer trail being formed across the middle of the centre half of the image. It’s faint, but you should be able to make it out. Here’s an example of a trail moving as sagebrush crowds out the old trail. Deer move around the bushes, favouring the uphill approach. The principle follows with does and their young, who keep uphill when following their mothers on the trail. And here is that uphill pattern again:

Note how the deer are approaching the little lookout ledge from uphill, veering to the right. They aren’t passing the hill and accessing it easily from the side. In short, they are following their mother’s line, that angle along the hill, and if they deviate from it, they do so at the closest possible V, and never at a right angle, and always joining the original line again. This is what it is like to think as a deer: to follow your mother, to leave her trail in movement, never sharply turning away, to bend around obstacles from the side. If you are male, you replace the high point with your body, for vantage. If you are female, you skirt it, for cover. And, of course, when dealing with the hard work of going straight up a slope, do it going down not up. Simple things? Not really. Look at my original image again:

My eye tells me the the vertical track is visible here, basically from the elm tree at the bottom of the image to just left of the poplar above it, but a closer inspection showed that not to be the case. That is not the track. It is, however, enough of the track that my eye accentuated it, so I could follow it. That is the human mind at work. A deer’s eye is equally at home in the Earth and just as capable of guiding the deer without any thinking at all. In animals, we tend to call that instinct. In humans, we tend to call it a visual error. But it’s not an error. It’s the eye thinking. Amazing.