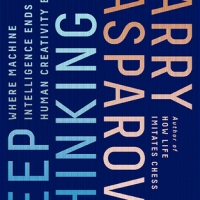 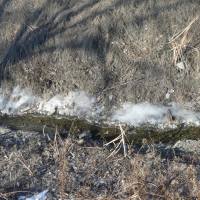 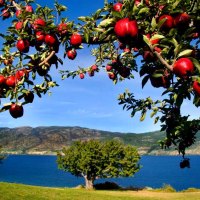 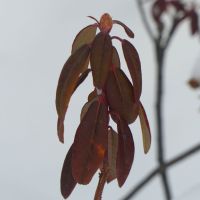 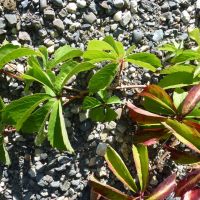 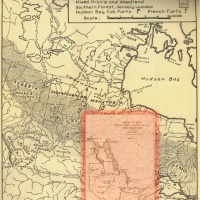 Below is a powerful map of Southern Okanagan Lake and the Okanogan River, on its route to the Columbia at Brewster. It shows clearly how settlers navigate from one colonial strong point to the other, laying down the body of the earth and the water as a setting in which these centres of colonial power can express themselves.

Note that this “setting” is known in settler culture as a “landscape” or even, in short hand, “the land.” This is a fine European art form. 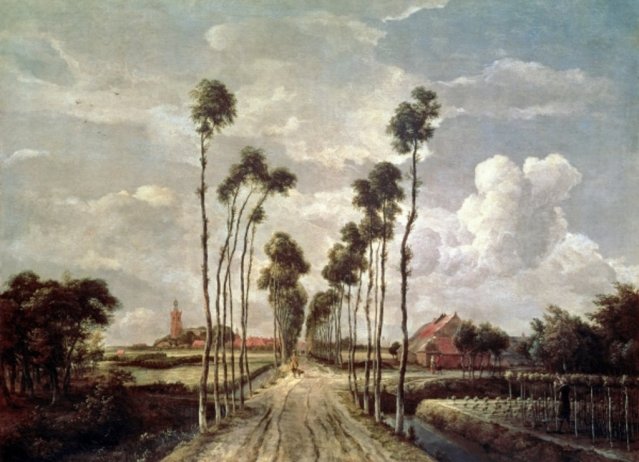 Note the central line of perspective, cutting through land, water, sky and habitation. This trick is called “art.” It is the point of this art form: to shape and to prefigure an understanding of something beyond or behind the world. In this case, the reframing of Heaven in a practical application of knife-like intelligence on the Earth.

Why don’t we move into the new year with the promise to not to do this any more. There are, after all, other maps. We don’t have to go far. we can start with a view of what is known as the Okanagan Valley again: 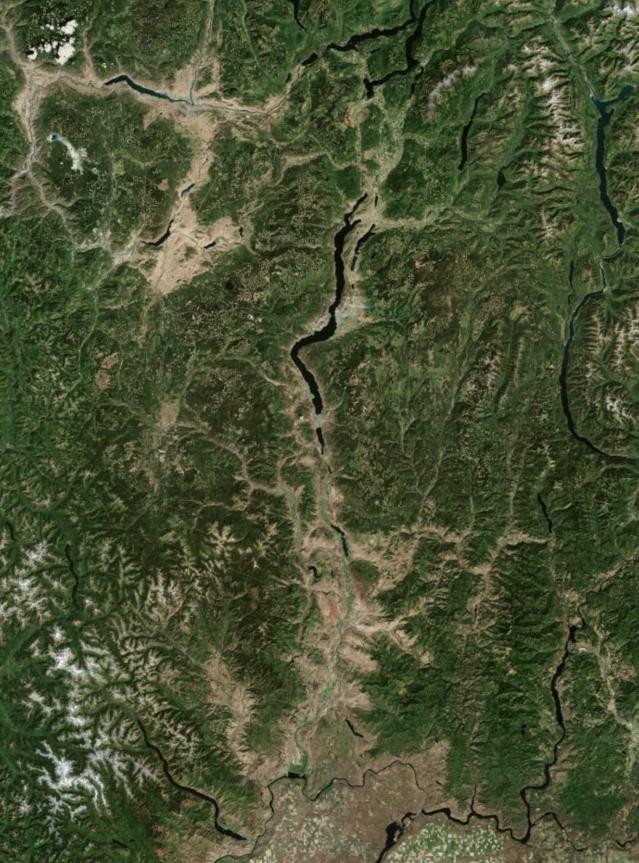 There is no lake and no river here. There is a continuous system, filling a fault line. This fault was gouged out by glaciers to form a deep fjord, which served to shift ground-up rock and water-rounded rock from the north to the south of its span, creating water in the north and sand and gravel and clay in the south. Look how the fault has been filled south of Tonasket: 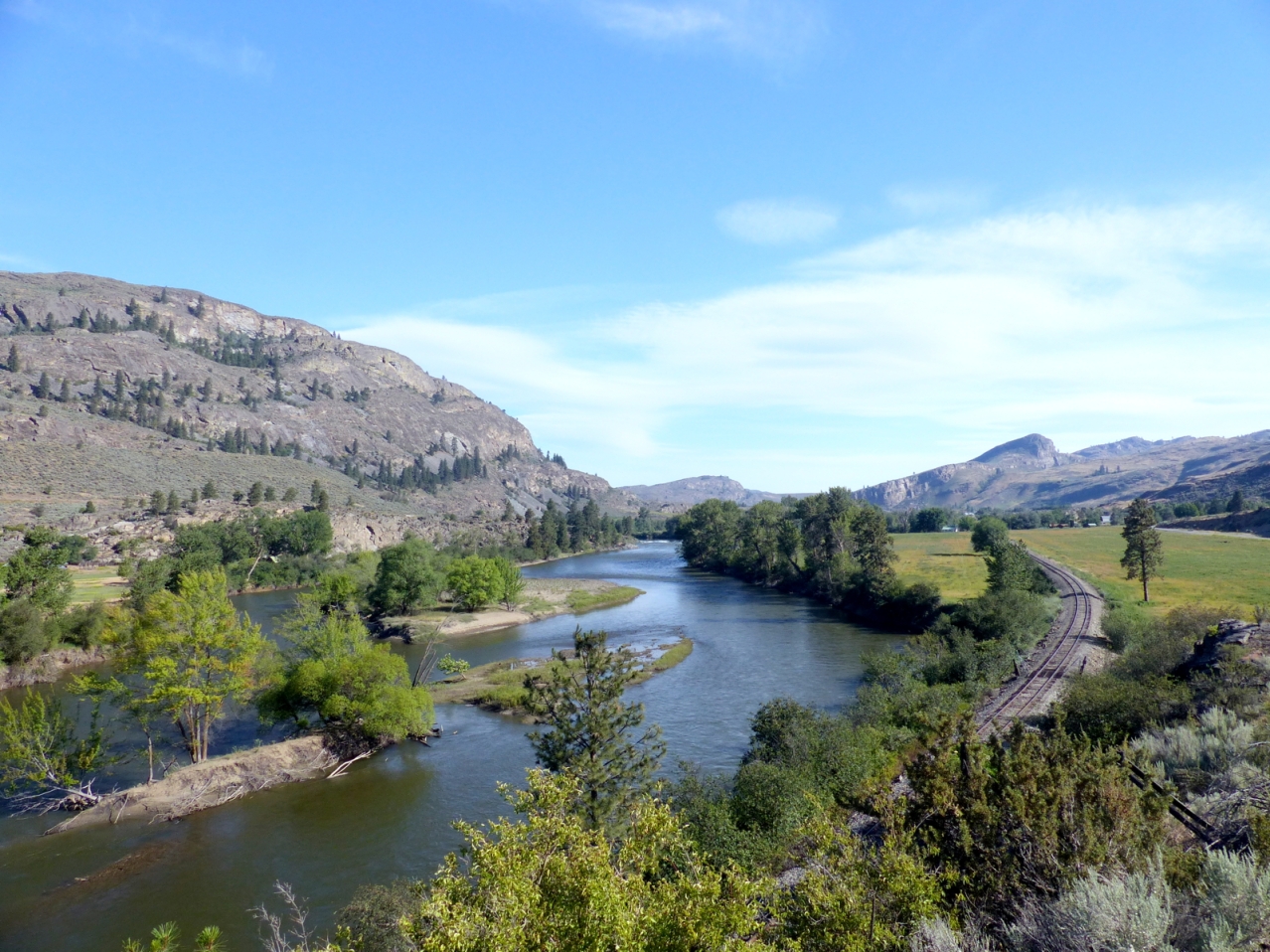 Valley? Hardly. It’s more meaningful to call it a crack in the Earth, in which water has been invited to express deep energies. Stone expresses the same energies. Here’s the Lizard Cliff above the old fishing site at sx̌ʷəx̌ʷnitkʷ. Below it, salmon were caught for thousands of years in weirs in a series of stepped falls. They are the foundation rocks of this cliff. In other words, what the cliff expressed, so did they. 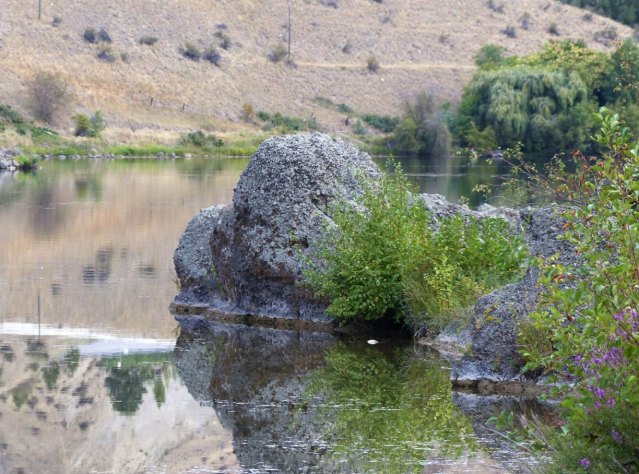 The falls were below this impounded water.

It’s a little hard to tell with the water raised over the rapids by a dam, though. 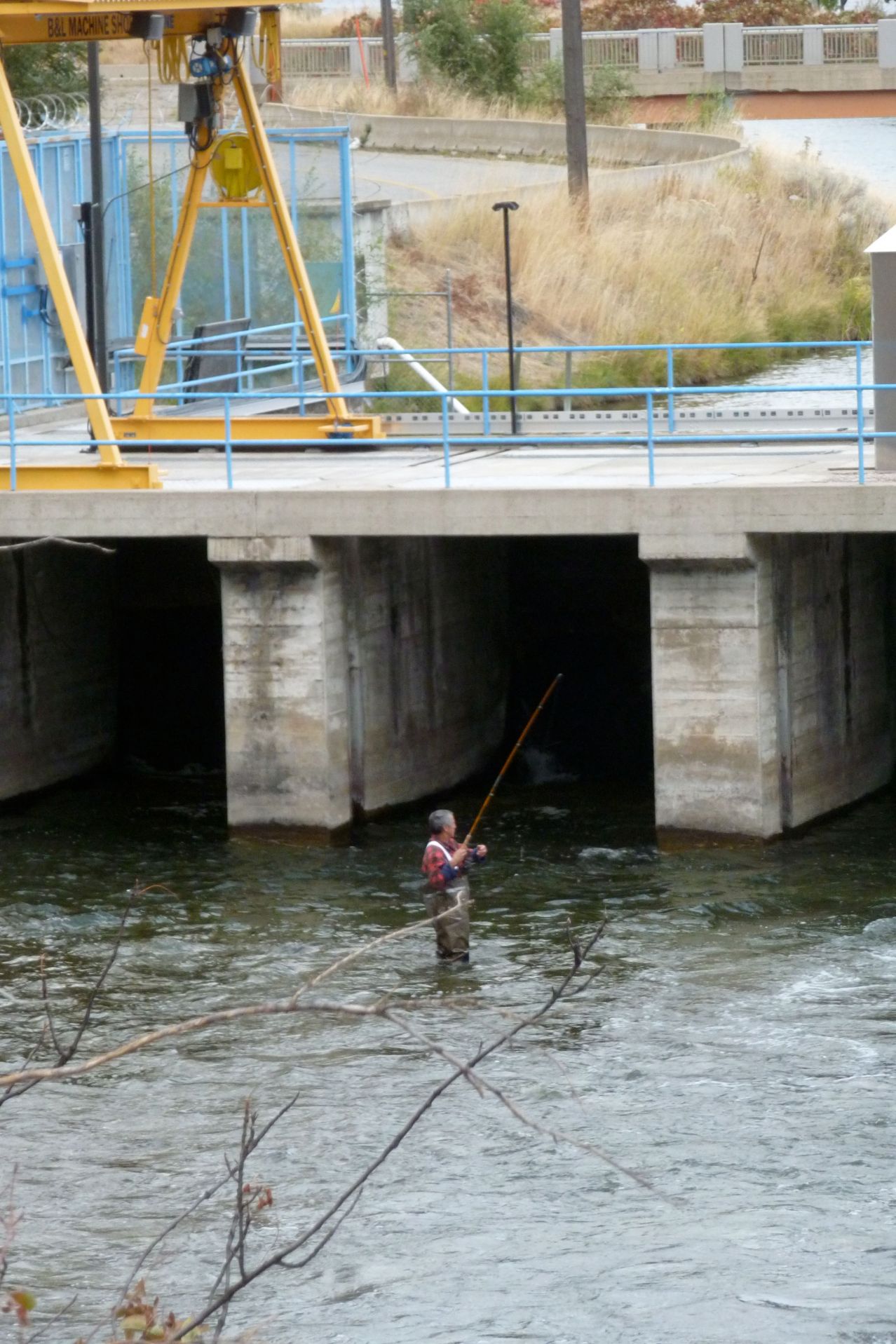 Winter light however, has revealed the land’s energies well. They serve as a map. Note the snake, or river, of bone (or stone) that the Earth thrusts up just under her skin and outlines in snow caught in shadow and so hidden from the winter sun. It runs from centre left to the middle of the image and then spills out in a series of broken steps back to the left. Above it is a ledge of grass. Let us know that as the lake of the sun. Above that is the cooler, wetter stone that has allowed trees to gather to it and delivers water to the sun’s lake and down through this fall of stone. That is one map of the Okanagan. 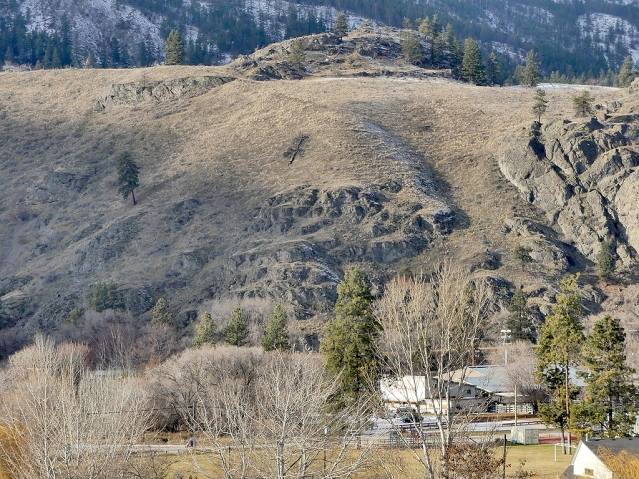 There are more. Look at the image again. The snake emerges from a gap in the cliff at the edge of the bench. To the left, you can, perhaps make out two human faces, meeting at their chins, and a small Okanagan Lake between them. To the right, two animal faces meet mouth to mouth. An Owl and an Eagle, it looks to me. Between them, the land narrows, crossed by a deer trail, and then fans open again. The shape is much like that of an hourglass. 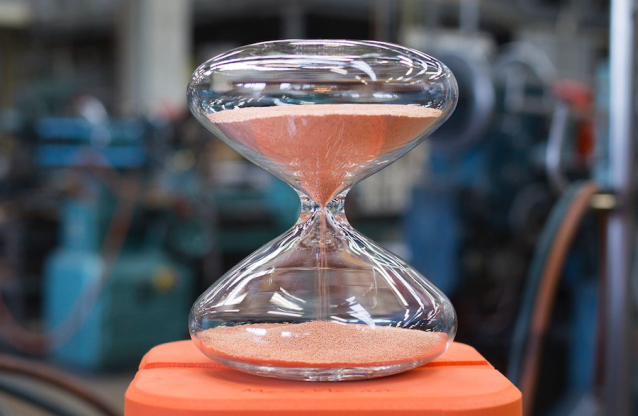 Note how that below this hourglass, the shape repeats itself. This time, the head on the left is that of a grizzly bear, while the one on the right is of a man with some other animal, a beaver or a marmot, forming his head and looking to the right. This time, the sand narrows, falls, then fans out again over ledges of stone.

That, too is a map of the energy here. Have another look. The face of the falling sand between the two old seafloor ridges in the centre of the image, with the big head above it, is feminine in shape, and is giving birth to the very stone that is creating the falls. This is Mother Earth herself. That is another map of the energy here. For a deeper discussion of this energy (and how human settlement in Cascadia falls within its story), see my post Return to the Snake River at the End of Time.   Thanks. With that within us, and sitting that deeply in the land, let’s look at the Lizard Cliff again, and especially the ridge revealed by the snow: 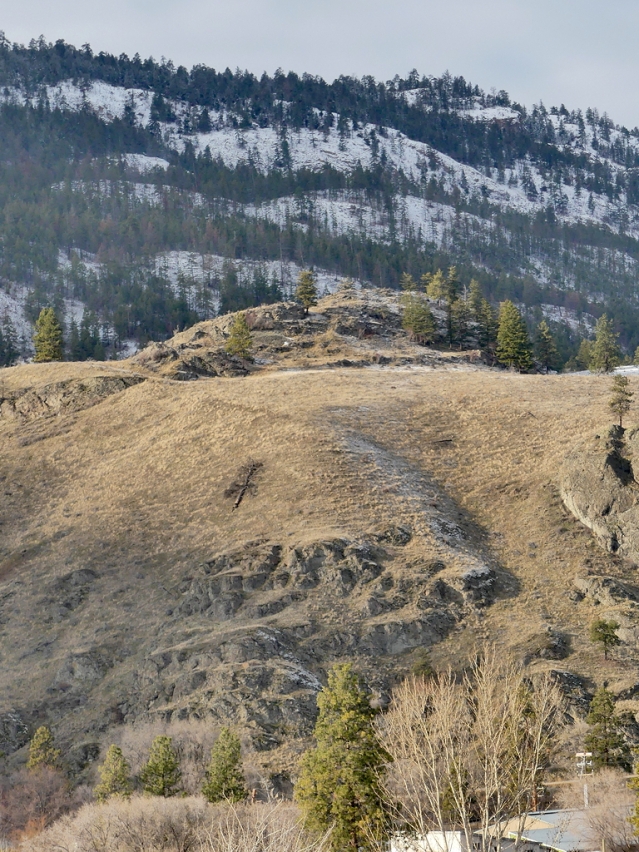 Perhaps you can see here that the concept I took you through above, that the land falls off to the river, is not precisely the whole story. It does, sure, with the grizzly bear at the centre of the image forming the head of the flow, which is his spine, but perhaps you can see now that just below the human head at the top of that spine there is a faint bear’s head in the grass, and perhaps you can even see the dog’s head morphing from its snout, and the other heads surrounding it. In other words, this is a two-headed snake, just as the cliff breaks continually into two, with one head grass and one head stone, and a spine between them. What’s more, it neither sinks to the river nor rises from it, but is both at once. Now, one more thing, looking at it again: can you see the figure with different eyes below, with a coyote laughing from the grass in the middle of the grassy flow?  And that the arched spine to the left, with the bear’s head at its anus is a dog, facing away from the coyote, and with its head pushing up at the human to wake her? 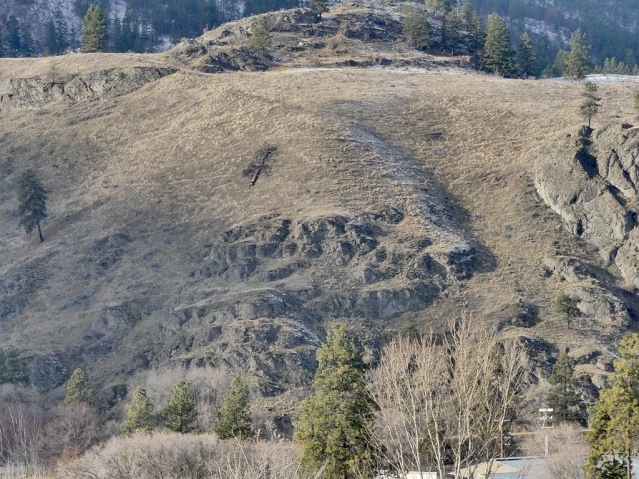 That too is a map of the Okanogan. It is a map of energy read as its own creatures. When you read it, you know where you are. What’s more, you know the essential energy shape of the entire fault. The figures I have showed you lie at the centre of the image below, just below Skaha (Dog or Horse) Lake. It is the point at which the fault changes from a water-fjord to a sand fjord. It is the waist of the hourglass.

In comparison, go a half day’s walk to the south and look north. The story has begun to open and express itself, or the story is narrowing to its point of purest expression. 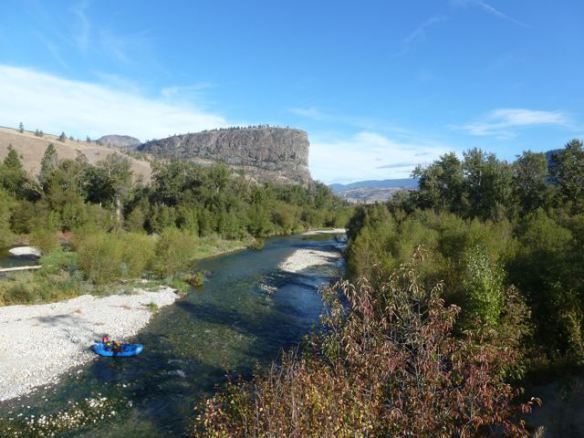 Nothing good can come of maps like that any more.