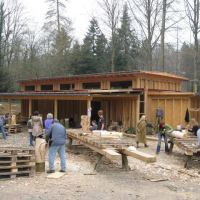 Making Spaces for All

Here’s an intriguing balance at work. Meet the staghorn sumac, and its friend the pussy willow. Both of them put hairs on their bodies to stay warm. Both of them have leaves, arranged to soak up as much light as possible. And, as you can see, the sumac doesn’t get all the light.

One could deduce that the goal here is to collect all the light. That would be efficient. Yet, there’s ample light for others to join in. One could deduce that this is aggressive behaviour. Competition, really. But is it? Might it not be kind of like this fence, across the road? The point of the fence is not to block all light but actually to let some through.

The reason for that is multifold. People like to look through fences, for one. A bit of light is cheerier than a solid wall, and you can’t really see through it anyway, so the wall serves its primary purpose, as a screen. And there’s this: it’s cheaper to build like this, and uses less material. What’s more, when the wind blows, it goes through the fence and doesn’t knock it down. So, back to leaves. Here’s a mountain ash, with leaves drying up and revealing their fall colours. Presumably, it wants to get as much light as possible, and if the principle of competition holds, it doesn’t want to share it. That seems to be working, but in no way is it blocking the light. Blockage is probably done by stealing the rain instead. With enough density at the core of the tree, any rain is going to be deflected to the perimeter, where the roots are. What’s more, any other tree establishing itself there is going to grow towards maximum light — away from the mountain ash. In other words, it’s likely that it is not necessary to control light here, but to manage water. Sharing seems to be OK, as long as it is on the perimeter. One uses one’s tree-mates’ own desire for light to guide their behaviour. Is that competition? Not really. It’s the creation of interlinked spaces. And, besides, the wind has to blow through the tree or it will break.

And it has an enormous weight of fruit to bear as well. It needs supple limbs for that, that are arranged in such a way that the environment is safe and inviting for birds. That is not competition, in the sense of aggression. It’s more like a competition to see who can attract the birds most easily, because birds spread your seeds. You have to have just the right balance of open-ness and closeness to attract birds. Stealing all the light, which birds need to see and be seen, just won’t do.

And then there’s the factor of time. The hazel below drops its leaves early, providing lots of space for sharing but at a time of year in which no other tree can use it. In the summer it effectively does take all the light, but in the fall it drops its leaves. If it didn’t make itself completely bare to the wind, the pollen on those catkins, which will be released in the early year, long before humans think of spring, won’t be blown by the wind, and that just wouldn’t do, now would it. Light is not the point at all. Wind is. 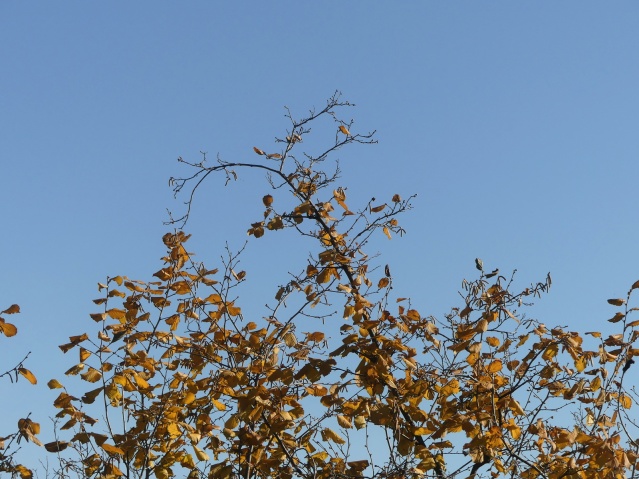 In fact, the creation of space is more important to all of these creatures than a competition for light. A traditional North American view would be that the trees below, with a view over Coldstream in behind, are in dire competition with each other. That is the standard view of Darwin’s theory of survival of the fittest. But look at the trees.

Look at all the space they are making. Too much is made of competition. Take the case of Johannes V. Jensen, a Dane who won the Nobel Prize in 1944.

A probing analysis of the problems of evolution forms the basis of my prose. During half a century of literary work, I have endeavoured to introduce the philosophy of evolution into the sphere of literature, and to inspire my readers to think in evolutionary terms. I was prompted to do this because of the misinterpretation and distortion of Darwinism at the end of the 19th century. The concept of the Übermensch had disastrous consequences in that it led to two world wars, and was destroyed only with the collapse of Germany in 1945. In the course of opposing this fallacious doctrine, I have arrived at a new interpretation of the theory of evolution and its moral implications.

In short, the Nobel Academy awarded him a prize for developing a theory of evolution based on cooperation and longing, rather than on competition and force, with the longing for a better environment and positive social relationships driving not only migrations but evolution itself. They were pretty fed up at the time with the idea the German state had been playing with for far too long: that evolution was driven by the most fearsome, terrible competition, defence and aggression. It is good to remember him from time to time.

Even when you’re in the poison ivy. Just saying, eh.