Rain in Cascadia is Not the Apocalypse

I just listened to a couple Canadian reporters talk about the stress of reporting on climate change and a hostile Earth firsthand during last months floods here in Northern Cascadia, and how they felt hopeless. Now, that was a surprise. While they were reporting, I was stressed myself, at how they were continually describing exaggerated and troubling but otherwise normal weather events in apocalyptic terms, even describing a normal weather event, atmospheric rivers, in terms suggestive of a planet gone roque. I was also frustrated at how they did not discuss the real problem here, a breakdown of civic infrastructure and a breakdown of the means of interfacing with the environment, which are rudimentary at best. What’s more, when other reporters filed stories on flooding in the Similkameen River, I must confess I was not amused. Water up to the base of the Red Bridge in Keremeos?

Serious, indeed, but how normal is that. I’ll tell you: normal as all heck. Water flooding hayfields 15 kilometres east of Princeton? 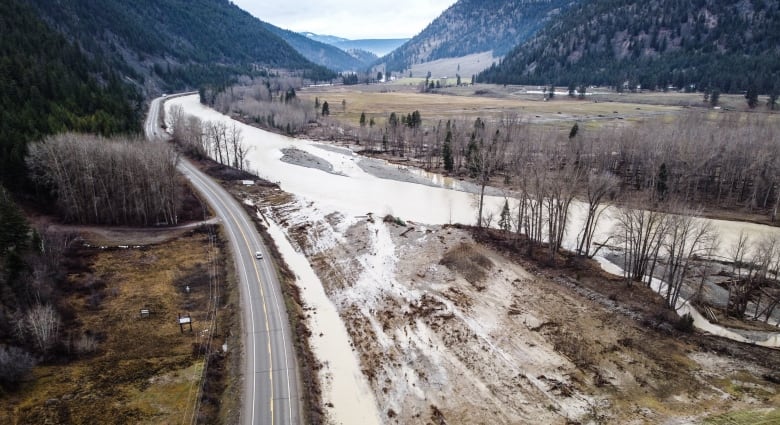 Well, yes, those fields always flood. There was even a story about how the dikes along this Cascadian river, that crosses the lines between American and Canadian imperial jurisdictions in Cascadia twice, weren’t continuous, and needed to be in these terrible times, to protect private property. https://www.cbc.ca/news/canada/british-columbia/orphan-dikes-bc-interior-1.6273906 Oh, Cascadians, is that not more than a little too much? To increase the flow of the river, scour out spawning gravels, increase flows and pressure down Chopaka way, rip out the bottomlands of the Lower Similkameen Indian Band, and dump it all in Washington? As it is, the results were a reversal of the flow of the Okanogan River in Oroville. Instead of flowing south to the Columbia after its confluence with the Similkameen, it flowed north, into Osoyoos Lake, as the Okanagan system had been drained of water to protect foreshore houses (with the consequence that 20 years of building salmon spawning habitat was destroyed by the artificially-lowered water.) https://ijc.org/en/olbc/record-high-similkameen-river-flows-cause-okanogan-river-reverse-direction-zosel-dam. Here is the Similkameen flowing backwards into Osoyoos Lake.

Well, all-in-all, a no-brainer. I have a friend down on the Reserve. We stood in front of his house, on a bench 50 metres above the river. He pointed out over the valley bottom, and said: “All this land belongs to the river.” It is as simple as that. Rain in Cascadia is not the Apocalypse. Rain in an imperial state, call it British Columbia if you like, where roads, houses, sewers, farms and such are laid down in areas that belong to the water, without making accommodation for the water, is the Apocalypse. But, just a sec. Is it really the Apocalypse if any destruction was caused by the breakdown of infrastructure that is in the wrong place? It is a catastrophe, that’s for sure, and a real hardship for people living within the imperial grid, but it is not the end of the Earth. It should be the end of any state that has built against the needs of the land and the water. A state like that should be replaced with a new state, composed of the same people in the same place, now working constructively with their flows, and that includes battling climate change from a position of strength and hope. Hopelessness only comes when you are trapped. We aren’t. We only have to completely change our lives. We’re going to have to, anyway, so let’s get on with it, with hope.