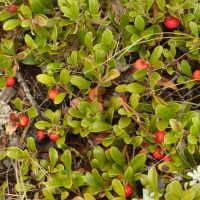 In an age of humanism, centered on the concept of humans as discrete physical beings, birth is a simple enough process: an infant gestates in a mother’s womb, comes out, breathes on its own, and there it is. The observation is accurate as long as the perspective of the newborn child, or even the foetus it was shortly before, is not included. In this sorting of experience, one thing is human and another is not. There is a boundary. This boundary is the privileged status of a particular kind of consciousness.

We are worlds, not bounded by our bodies but reflecting our awareness of them. In 2020, all of us worlds discovered how vulnerable human identity is when its only world is social. Maybe this will be the year in which we regain the ability to see how the human mind takes air bubbles in a stream…

Wolf Being Spoken by a Human Face That is a Mouth

… and becomes aware of how eye and mind have shaped them into a narrative of transformed bodies, and becomes aware as well that a squirrel, say, is the same force, subject to the same shaping, and that one only sees oneself, or, better, the world, through a bodily lens. This body seeing is the point.

In a sense, this is what bodies see: bodies, real and imagined.

The weakest expression of a conscious being is the one who walks on. Fortunately, we walk within constant creation and transformation. Every world (we used to say ‘human’ or ‘person’) is spread through all the things of the world., The human mind, on both sides of birth (with birth as a never-ending process) views them through the process of becoming itself, as part of this becoming. The images in the ice below are not human shapes. To a human eye, they do, however, appear to be.

All of us have assembled a self from experience like this, in the womb and in the social womb of infancy and growing self-consciousness. This is the way a body thinks, when not viewed through the modern perspective (a few hundred years old now) that views the world through the lens of an abstracting self that relegates consciousness of the kind in the image above to the realm of unconsciousness, dreams, fantasy, childishness, ignorance and art: as things incomplete or artificial? It identifies human consciousness so strongly with this abstract, rationalizing principle, that at this stage of its becoming it even considers artificial intelligence as a good successor for human thought, when it is nothing of the kind. It is profoundly anti-Indigenous. It lives nowhere. Its ignorance invents empty space around itself and then is terrified when the “other”, hidden by that distancing, arrives, such as a corona virus. Tellingly, the virus does not target worlds but individuals separated from identity with them. May this be the year in which our social lives join with the Earth again and we stop imagining we have finished with being born.

We are worlds being born.