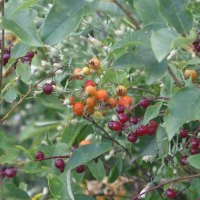 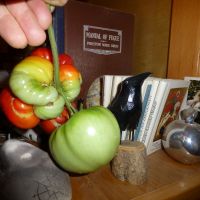 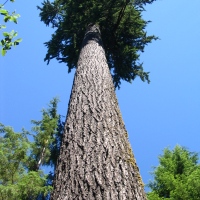 Ponderosa Pine: The Tree at the Heart of a People

There is a tree that determines the home range of a people. This is the North Plateau Ponderosa Pine, known in Latin as pinus ponderosa Douglas ex C. Lawson. Wherever this tree grows, those of us at home in Columbia Plateau are also at home. Here she is …

As you can see, she doesn’t mind fog, frost or cold. You’ll often find her growing with saskatoons (as you can see to the left and right of this image), building communities with them within the grassland sea. The latin for saskatoon is amelchior alnifolia. A more fascinating thing about her is that she withstands extreme cold by growing in spirals within the tubes of her red bark. This helps ease the stress of the frost out in the open grassland. 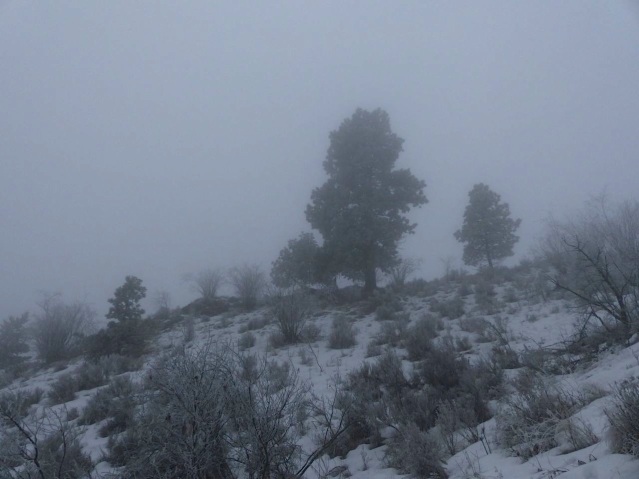 Ponderosas grow singly, or surrounded by a few daughters — that is, unless they are disturbed by fire suppression. Here are some that have been allowed to become a hazard to themselves at St. Mary’s Mission above the drowned cultural site of Kettle Falls, Washington …

Fire should burn cool and quick through these trees every 5 to 8 years. Because of fire suppression, if it came now it would burn very hot. In such a fire, this, one of the first missions in the Plateau and the staging point for Father Pandosy’s historic mission in Okanagan Territory, would be lost in a couple minutes. Here’s a ponderosa given a bit more respect at Conconully, Washington.

The grassland continues right up to the trunks of these ancient trees. Under their low-hanging branches, the mule deer spend their nights, in the dry grass.

They are very beautiful trees.

They have bark that no child can resist. I used to spend hours mapping the continents of entire worlds by tracing the bark of the one just downhill from my house. You can learn mathematics and writing from bark like this:

I sure did. Here’s some of that math…

Ponderosas have the most exquisite leaves. It is as if they were birds. Certainly, they are ancestors. 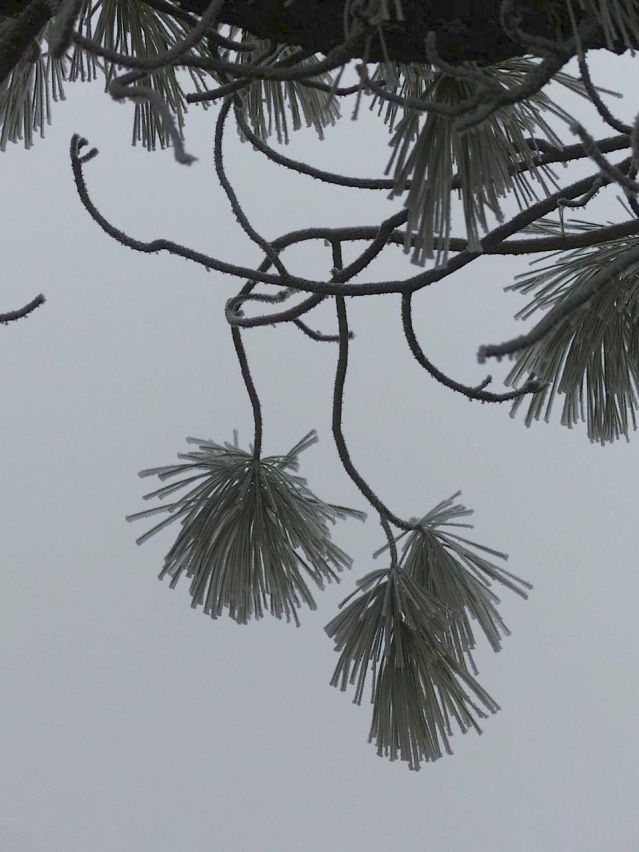 When the high summer sun catches in these needles, they become tubes of white light, but in the winter,  ah, they have a different magic then. Some of it is made of frost …

… and some of it is made of pure energy.

The cones of these pines are earths of their own. I broke one open last year and instantly found at least a dozen species of insects I had never seen before. Here’s a young earth, or cone, that hasn’t yet left home…

And here are some that gravity has carried far from their mother, on Turtle Mountain. Note that water follows the same gravity paths. Where the cones congregate so does the water (well, not at the time of the year this image was taken, but, still…)

Except at the northern fringes of the Plateau (up in the great Cariboo-Chilcotin Grasslands, where Douglas firs take their place), ponderosa pines are the lone trees and the anchors of small savannahs of bushes and butterflies.

Trees like this are the sisters of the grass.

They don’t need that 10,000 year old glacial water down below. Cicadas feed on their roots for years, then come up and sing. They are the voices of the ponderosas. Here’s one moulting last summer … 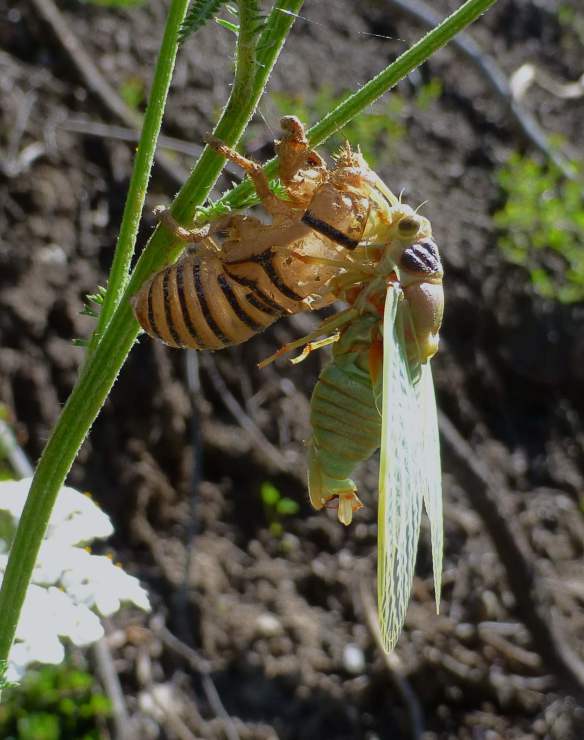 On a hot day, you can suck on a slice of cambium from a ponderosa, that clear layer between the bark and the wood, and become as clear as the wind. After doing that once, I fell asleep one hot July day under a ponderosa on the ancient hunting trail up along the ridge of Cawston Creek Canyon and woke with a memory of the earth as the repository of all people who have touched her in this place. Red-tailed hawks traced their geometry overhead. Their cries echoed across the grasslands. I walked down then to the orchards that had been my life … and never found my way properly back. How could I? 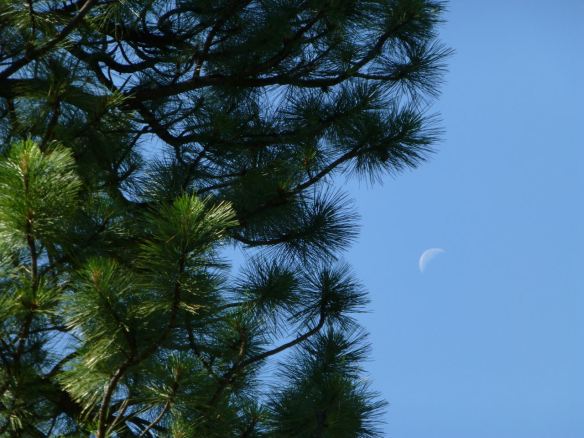 These are the trees that define a people.

We are not exactly ponderosa, because that is a name given by men, but we are this: 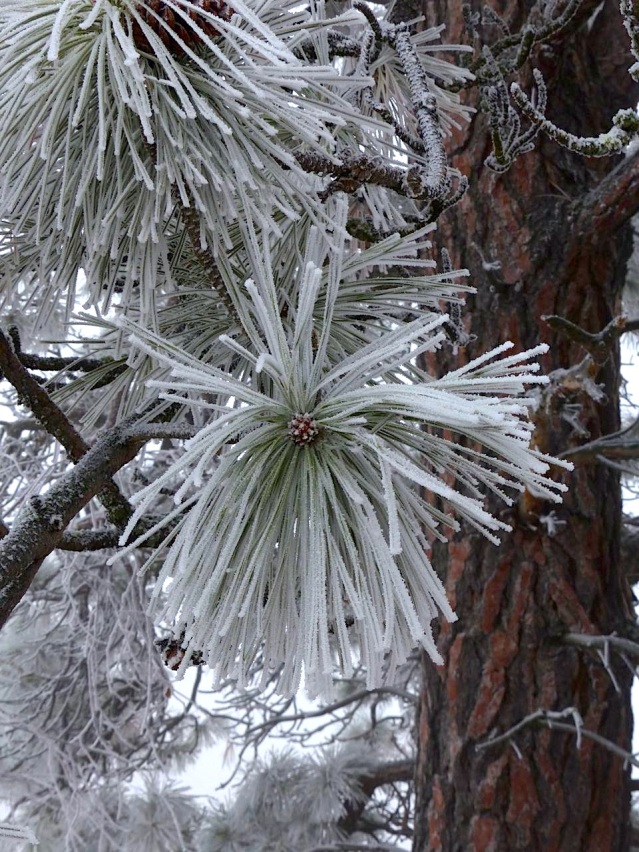 Wherever these trees are, we are home. Where they are not, we are not a people. 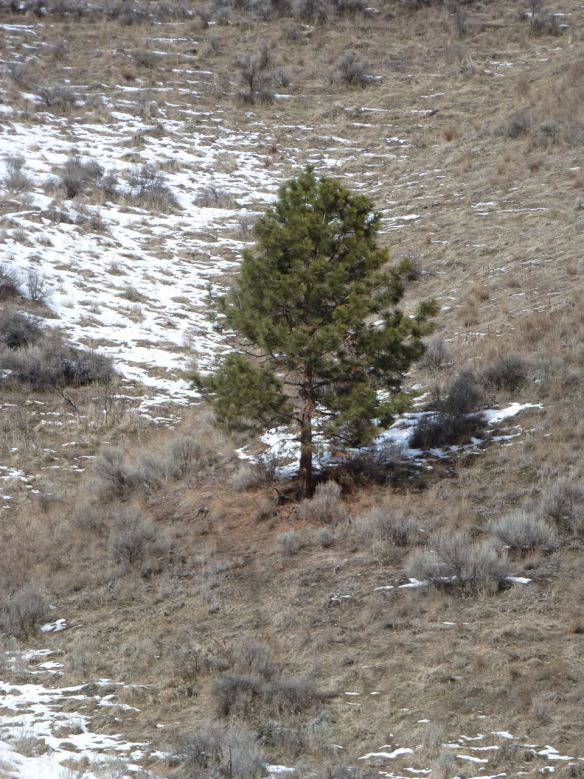